Note: this post was originally published in November 2016. As of the time of this note (December 2019), the NY Times has done a lot of great work, but they’ve also published a fair amount of irresponsible and/or sensationalized reporting. I’m not going to take down this post (unedited save for this note), but I’d certainly express things differently were I to write it today.

To the business team of The New York Times:

In a time of uncertainty, it’s been nice to see people rally around the cause of journalism. Here in Silicon Valley, there’s (sadly) long been a sense that newspapers were old-fashioned and irrelevant. But on November 8, many of us realized — perhaps belatedly — that a thriving free press was going to be pretty important in the years to come.

I don’t need to tell you that the newspaper business has fallen on hard times. Print revenues have dropped by over 70% since 2000, and online revenues for most newspapers are still quite small. Unlike most news organizations, The New York Times has substantial online revenues — but not enough to offset the decreases in revenues from print ads. In recent years, the New York Times Company’s revenues have dropped by over 50% and you’ve had to lay off some terrific journalists.

The good news is that after 15 years of tough days for journalism, everyone is paying attention to you. I humbly ask your business team: please take advantage of this opportunity. While The Times‘ journalists should continue to uncover truth (as they have for many decades), The Times‘ business operations should be more aggressive in pursuing larger revenues while we’re all paying attention.

Currently, The Times offers three subscriptions: one for $16/month, one for $27/month, and one for $40/month. In the current environment, many customers would gladly pay far more than $40/month to support your efforts — if they could.

You don’t need to offer much to justify a (significantly) higher subscription price. Let your high-value subscribers be part of a fancy club, let them attend special parties once or twice a year, and send them a tee shirt or a mug. Be sure to remind them that a small number of premium subscribers could support hiring a journalist who might uncover the biggest story of 2017.

If you want tips on appealing to that audience, speak to someone who fundraises for a top private university: they make similar arguments very well.

Our country will be tested in the years to come and The New York Times will likely be tested too. This is a time for your business team to be shameless and bold, to make as much money as you can — and then to invest in the great journalism of The New York Times. 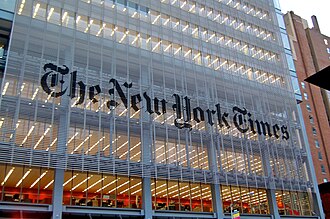